Report: How the Right to Deny the Existence of God is Under Threat Globally

Via, the Independent, How the right to deny the existence of God is under threat globally:


Atheists and humanists are increasingly being targeted as distinct minorities in “hate campaigns” across the globe, according to a new report which found that religious and political leaders are ratcheting up rhetoric against those who believe there is no God.

The Freedom of Thought Report, which rates every country in the world for anti-atheist persecution, found that almost all countries discriminate against the non-religious, in some cases through religious privilege or legal exemption.

Canada's blasphemous libel law, religious tax exemptions, and public funding of religious schools made the report (among others).

From Canada's section within the report, on page 191:


Despite what should be strong constitutional protections for freedom of thought and expression, significant religious privileges are in force [in Canada], both nationally and in several of its ten provinces and three territories. 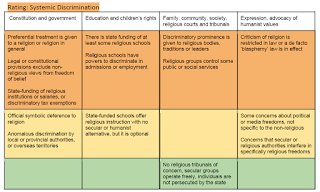 I was pleased to see the Liberal Party of Canada (Alberta) propose a resolution to repeal Canada's blasphemous libel law. I hope to see it on the Winnipeg biennial floor.

It's certainly far worse elsewhere in the world, no question. Doesn't mean there isn't work to be done here.

Hopefully, we can remove some of these policies.
@ 2:04 PM