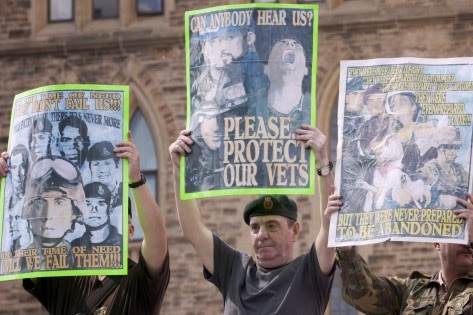 On the following motion.


That, in the opinion of the House, the men and women who bravely serve Canada in the armed forces should be able to count on the government for support in their time of need, and that the government should demonstrate this support by (a) immediately addressing the mental health crisis facing Canadian soldiers and veterans by hiring appropriate mental health professionals; (b) reversing its decision to close veterans' offices; and (c) prioritizing and concluding the over 50 outstanding boards of inquiry on military suicides so that grieving families may have answers and closure.

Because attacking them publicly and politically simply isn't enough.
@ 10:14 AM