It would appear that the Ontario Conservative Party's support for right-to-work legislation is costing them support and costing them candidates.

You can read the Wikipedia entry to find out what right-to-work legislation is. It essentially allows a new employee to bypass membership in a union, but benefit from any gains made by a union agreement negotiated with the employer. The idea being - as new employees join and are perhaps encouraged to opt out of union membership, the union's strength will be diluted, favouring the employer in collective bargaining.

As a result, candidates in labour-heavy ridings are reluctant to jump on board the anti-labour movement.

First, the party fired Dave Brister over his public opposition to the policy. 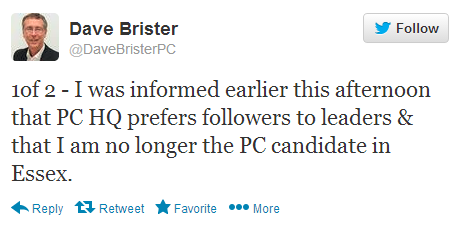 Now, two Hamilton-area Conservative candidates have resigned. They "say they are stepping down for personal reasons and they support [Conservative leader Tim] Hudak and the party's policies."

Hamilton. Brister dumped because of opposition to right-to-work. Two candidates.

Another labour-heavy riding, Oshawa, currently has a Conservative MPP - Jerry Ouellette. I couldn't find any statement about his support or opposition to right-to-work

[As an aside, I have it on good authority that there's no fence Mr. Ouellette isn't willing to sit on.]

I did, however, find this YouTube video created by Jesse Cullen asking Mr. Ouellette for his thoughts. It didn't look like Mr. Ouellette was prepared to comment.

There's no question this plays to the Conservative elites, but it appears it's not trickling down to the masses nor is it resonating with Ontarians.
@ 11:31 AM