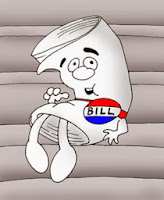 In response to a tweet I had sent out that summarized my opposition to the Reform Act, Andrew Coyne pointed me to his article that suggests an amendment that could help me overcome that opposition.

To summarize my opposition, I object to the idea that caucus members should be entrusted with the power to remove a leader given that the general party membership works hard to select a leader.

Andrew suggests that parties change the mechanics of leader selection to give the power to the caucus to select the leader.

While that certainly alleviates the concern -- those entrusted with the firing are also entrusted to do the hiring -- it diminishes the point of party membership.

People join political parties for many reasons, but if I had to pick the top three it's to nominate local candidates, to participate in leadership contests, and to propose and advance policy. The first two typically cause spikes in membership - some members don't stick around for the last point, getting all excited to get a candidate in or a leader selected.

The Reform Act entrenches the rights of local members to elect local candidates. I think that's good - I'm not sure it requires legislative weight, but it's hard to argue against it. Local members electing local candidates helps build the party's brand in the riding. The Reform Act (and the Andrew Coyne Amendment) would take the power to select a leader out of the hands of members and deliver it to the caucus.

That leaves the policy aspect. On the surface, it's not as exciting to the general public, but it's arguably as important as candidate / leader selection. Party policy is what a candidate campaigns on and what a leader will try to form government and become Prime Minister on.

Parties will continue to run policy workshops leading to a policy convention. A platform is constructed and delivered to the leader. However, the leader is now accountable only to the caucus. The caucus, only accountable to their riding associations. If a leader fails to follow party policy, it falls on the caucus to initiate a review.

True, caucus needs freedom to respond to the governing situation of the day, but adherence to the policy framework is necessary.

The answer, possibly, is that caucus would be responsible for proposing and advancing policy. Presumably, they would want to see move forward policy they propose ...

There's one part of the Reform Act that I'm really stumbling over. Specifically the notion that 15% of a party's caucus can initiate a caucus review of the party's leadership. If a majority of the members of a caucus agree then that the leader should be removed, the leader is removed and an immediate vote is held to name an interim leader so the party mechanism can be initiated to select a new leader.

Not all parties have the same mechanism to select a leader nor do all political parties leave leadership selection to members only - the Conservatives, and New Democrats have different models for choosing a leader which they both claim is better or fairer over the other, but all stipulate you must be a member. The Liberal Party does not require membership to vote on leadership.

As a participant in a leadership contest, I put a lot of effort into selecting a leader that, in my opinion, will represent the party on a national level. I review policy positions, review voting records, and review commitment to the party. While I may put in a lot of effort in my local riding (or nearby ridings), I don't put the same level of effort in all ridings to help pick and select candidates. An MP does not speak for me in regards to confidence in party leadership, by virtue of simply being an MP. Being an MP does not elevate your position to remove a leader above me.

As a party member, if I do not like the choice of leader, I'm free to continue to support the leader or leave the party. To approve of the party mechanism before selecting a leader, then to actively work against it post vote seems to be slightly disingenuous. That holds true for MPs. Simply by virtue of being an MP does not elevate your standing in determining who should or should not be leader other than guaranteeing you a spot at a leadership convention.

Members of Parliament, who feel they have the support of their riding, but no longer feel they can contribute meaningfully to their party in supporting the leader, are free to resign from their caucus and run again as an independent or seek the nomination from another party.
@ 12:52 PM 1 comment: