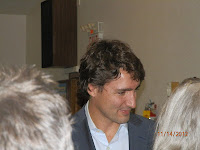 Just back from Port Perry where I got a chance to see Justin Trudeau speak on behalf of his leadership campaign and on behalf of Grant Humes, the Durham Liberal candidate for the November 26th by-election.

Some highlights of the stop.


As if to show how successful he is in engaging youth, I noted that there was a young girl snapping pictures of Justin with her Nintendo DS.