Though the Conservatives created the [Parliamentary Budget Office], there have been numerous arguments over the years between the government and Mr. Page over the appropriate role of the office. Generally, most of the disputes have been over transparency and whether Mr. Page should have access to internal government documents and databases.

The latest battle with the PBO comes as the government is on the defensive over the specific impact of budget cuts to the Canadian Food Inspection Agency, which is in the midst of responding to a massive beef recall. Ottawa’s March budget outlined plans for an ongoing cut of $56.1-million – or 7.8 per cent – to the CFIA’s $722-million budget by 2014-15. Mr. Page says this is an example of an area where his office needs a better explanation of what is being cut.


The International Monetary Fund is taking a dimmer view of Canada, cutting its economic forecasts and warning of the threats from the housing market and swollen consumer debt levels.

Much like the Republican Party in the United States, it continues to be crystal clear that the Conservative Party is not the best party to manage tough economic times despite their propaganda to the contrary. Instead, the party seems to exist solely to waste the efforts of previously stronger economic governance. 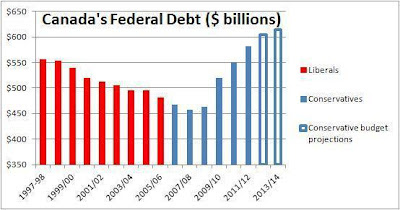 The Conservative Party has already failed social conservatives. This house of cards won't last much longer.
@ 9:30 AM