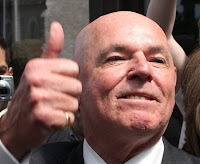 I don't pay much attention to Larry O'Brien. I know he was Ottawa's mayor, but he had no direct impact on me or my life. The only thing I paid attention to was when Toronto elected Rob Ford, Rob Ford was dubbed "our Larry O'Brien" and that Toronto shouldn't vote for him. Makes me hopeful that Ford will also only be a one-term mayor.

In any event, Larry de-friended me on Facebook. I suspect it was when I commented on a blog post he wrote and subsequently shared to his Facebook profile.

Luckily, I too have a blog and I can address his post with my own.

I contend that Glenn Beck will be seen as one of the great credible leaders of our times when they write the story of the twenty-first Century. I for one will be following him.

Again, I do not know Larry very well, but I do know Glenn Beck. I think everyone does.


"The only [Katrina victims] we're seeing on television are the scumbags."

"So here you have Barack Obama going in and spending the money on embryonic stem cell research. ... Eugenics. In case you don't know what Eugenics led us to: the Final Solution. A master race! A perfect person. ... The stuff that we are facing is absolutely frightening."

"I'm thinking about killing Michael Moore, and I'm wondering if I could kill him myself, or if I would need to hire somebody to do it. ... No, I think I could. I think he could be looking me in the eye, you know, and I could just be choking the life out. Is this wrong?"

"I went to the movie this weekend with a gun. And surprise, surprise, I didn't kill anybody!"