I'm not understanding the latest outrage at the discovery that Rob Ford's mayoral campaign team employed a fake Twitter account. Unless they used the account to libel, of course. I'm not sure why more campaigns didn't employ this strategy.

My cousin-in-law is now the mayor of Oshawa!

After serving one term on council, John Henry captured the mayor's seat with nearly double the number of votes won by second place finisher and incumbent John Gray.

... Mayor-elect Henry said he has spent the past four years pushing accountability and transparency, stressing that residents have the right to know where every dollar of their tax money is spent.

He said that, combined with the fact that he is the only member of council who didn't spend a dime out of his taxpayer funded expenses account, won't receive a severance and took a pay cut on his councillor salary, helped push him to victory.

"You lead by example," the new mayor noted.

A good candidate with a fantastic record. Oshawa is back on the right track!
@ 9:30 AM 2 comments:

Offered without comment, but with a picture of Ralph Nader. 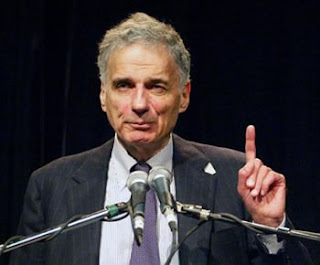 An Open Letter to George Smitherman on Safe Injection Sites

I recently announced that I support you for mayor of Toronto. With Rocco Rossi's departure from the race, and Rob Ford's divisive and reckless brand of conservatism taking centre stage, you present the only alternative to me.

However, I was disheartened to learn of your unfortunate and misinformed opinion of safe injection sites, which I reprint below. Especially disheartened, since you're a former provincial health minister.

"I do not support safe injection sites because I am not convinced of its merits," [George] Smitherman said.

Here are, once again, the merits of Insite, the Vancouver safe injection site.

If you could clarify to me why you do not support safe injection sites, that would be greatly appreciated.

An Honour for Bill Davis

The University of Toronto Mississauga has re-dedicated their South Building the William G. Davis Building, in honour of Ontario's former Progressive Conservative premier.

“For over 40 years, Bill Davis has worked hard to improve the lives of people in the province of Ontario and nowhere is this more apparent than in our post-secondary education system,” said [Professor Deep] Saini. “Everywhere you look, we see reminders of his commitment to excellence in education—be it in the extensive growth of our college system or right here where he paved the way for what is now the University of Toronto Mississauga.”

George Smitherman for Mayor of Toronto

A week is a long time in politics.

I prefer balanced, measured, and pragmatic conservatism in government. I am traditionally an Ontario Progressive Conservative supporter.

I do not support reckless government policy sold under the guise of "conservatism" using the label "respect for the taxpayer". It's always wrongheaded, it's always motivated by emotion, and it always ends up costing more in the long run.

I was a vocal Rocco Rossi supporter. When I learned that he had pulled out of the race, I thought I'd pull out from participation in the Toronto election.

I continue to not want Rob Ford as mayor of Toronto. He represents a corruption of the Canadian conservative brand. His inexperience and his over-zealousness to lead an every-man revolution is indicative of his not being up to the job.

Toronto needs to vote George Smitherman for mayor.
@ 11:17 AM No comments:

I went to the beautiful city of Paris, France, for a short vacation last week, to come back to news that my candidate, Rocco Rossi, had dropped out of the Toronto electoral race. Miss a week, miss a lot.

The past nine months have been an incredible journey. I have been moved by the stories of hope and inspiration that Torontonians from all walks of life have shared with me.

With your help, we have made a real impact on this race and the future of our city.

We have shed light on the issues that matter to Torontonians: getting value for our money, moving Toronto forward, and making City Hall honest.

Make no mistake, together we accomplished great things.

I have been inspired by the countless volunteers and supporters who took time out of their busy schedules to knock on doors, make phone calls, attend event and pound in lawn signs.

I have been inspired by the people from every corner of our city who have stood up and demanded change.

I have been inspired by Torontonians and our great city.

Rhonnie, DJ and I thank you, from the bottom of our hearts, for all you have done and continue to do. It has been a true honour representing you as a candidate for mayor, and I thank you for the opportunity.

Maxime Bernier was for the Census, before he was against the Census

"[The census] continue[s] to be essential for providing the information needed by governments, businesses, researchers and individual Canadians to shed light on issues of concern to all of us."