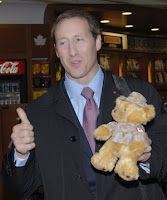 There's just no way around it [Toronto Star, Afghan beaten by police was in Canadian custody: top general]:

In an unexpected and explosive admission, Chief of Defence Staff Walter Natynczyk said not only was it known Afghan police abused prisoners but that one in particular had been handed over by Canadian troops.

Natynczyk said suddenly new information arrived on his desk today after telling a parliamentary defence committee Tuesday that a prisoner beaten by Afghan police had not be in Canadian custody before he was handed over in May 2007.

"The moment I saw this report his morning I realized that the information I provided yesterday was incorrect and I am responsible for that," he told reporters.

I don't believe for a moment that "suddenly new information" arrived. Suddenly, they realized, this story wasn't going away with constant denials.