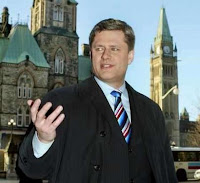 Canadians think politicians don't get along well, that they've accomplished little in the past year, and few would want their kids to grow up to be one.

And yet, 72 per cent of those surveyed by Ipsos Reid said they disagreed with the statement "Politicians in Ottawa got a lot done this year." And that disagreement was consistent across sex and regional lines.

Stephen Harper has now confirmed to Canadians he believes Parliament is irrelevant as well.

Last Dec and Jan when Steveo closed shop the economy lost 71k and 24k jobs respectively.....not that I hope there are more job losses this Jan and Feb but if there are....then Donolo & Co. have to attack this mirage of the CPC being better fiscal managers....job losses amidst massive spending and massive deficits should bring down that house of cards.