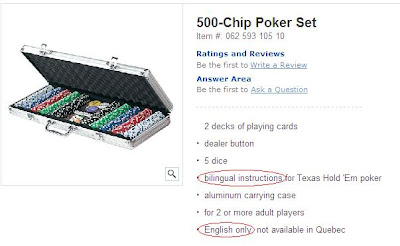 The two seemingly contradictory statements are probably not incongruent at all.

There are likely bilingual instructions, but according to the draconian Quebec language laws, that is not likely enough to satisfy it as being a 'bilingual product' or some such nonsense.

They probably require that the chips themselves have French bigger than English or something.

I don't blame companies passing on the Quebec marketplace. With all the extra hassle, it's probably not worth it.

maybe it's english and spanish...