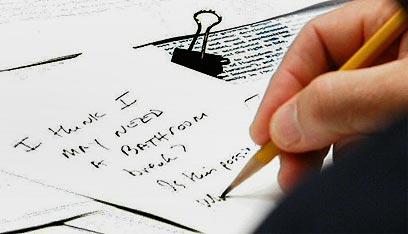 The traditional photo of the G20 leaders was reshot after Prime Minister Stephen Harper missed his opportunity Thursday to be in the first snap.

Harper met with his officials following the first working session in London on Thursday morning when the picture — dubbed the family photo — was scheduled to be taken.

Officials said the prime minister was getting a quick briefing on changes to the communiqué that is expected to be released by the G20 at the end of the summit.

The BBC, however, is reporting that Harper was in the bathroom while the photo was being taken.

Emphasis mine. I wondered if I could ever use that picture again.

No matter. Everyone still knows Harper's full of it.

He was getting a "briefing" in the washroom.

Please, tell me there's a way to spin this into some kind of gay tryst between Harper and a staffer.

You need to find a photoshopping expert to change the text on the note to "do I tap once or twice in the stall."

Why didn't the PMO just step in and explain they could photo-shop a younger, slimmer, taller and more relevant Harper into the existing shot, maybe hovering above them all slightly in the center?

What scares me is that if these guys can't manage a simple photo op, how are they going to manage the recession and banking crisis?

"Wide Stance" Harper must be so proud.