Remember how I said back here that Stephen Harper still thinks he's leading a party based on rural populist values? It's clear he's delusional.

Newly-re-elected Prime Minister Stephen Harper today served notice that he will stack the Senate with Tory appointments if necessary to push through democratic reforms of the chamber.

The ends justifies the means, I guess. And, if they can use that stuffed Conservative-filled Senate to pass other legislation, what's the harm? Right?

This stuff almost writes itself.
@ 5:06 PM No comments:

Garth Turner's defeat to Conservative Lisa Raitt is a huge loss to the Liberal caucus as far as I'm concerned. He wasn't afraid to ask himself what a maverick would do and then do that (yes, I'm channelling Tina Fey).

I'll say it again - the House of Commons would be better with a few more Garth Turners and a few less of the "principled alternatives" ...

Speaking of principled alternatives, we say goodbye to Rahim Jaffer - yes, he was only the messenger.

I was going to say we also say goodbye to Michael Fortier, but since he never sat in the House, we never technically said 'hello'.
@ 4:04 PM 2 comments:

On the Election Results Continued ... 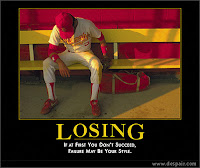 The parties claiming victory today owe more to a flawed electoral system and voter apathy, then to any message they delivered.

The Conservatives picked up 16 more seats on a total popular vote share gain of 1.37% and the NDP picked up another 7 on a total share gain of 0.79%. All parties, with the exception of the Greens, pulled in less total votes than they did in 2006.

This, to me, is a failure on all counts. Facing an uncertain economic future, less Canadians bothered to vote and, of the ones who did, voted almost identically as they did in 2006.

Stephen Harper still believes the Conservative Party is a Western-based protest party rooted in rural populist values (it isn't) continually hampered by imaginary media bias and Liberal-appointees in every shadow (they aren't). Stephen Harper continues to struggle in articulating a palatable conservative message to all Canadians. He failed to deliver a majority conservative government in his third try at it, all the while having favourable conditions for victory in each case. The fault is his, and his alone. He controls the message, he takes 100% of the blame for the party's failure.

If the Conservatives want to move forward, they need a new leader. Not right now maybe, but one that can articulate that message over the noise.

I joined the Liberal Party because I do not buy into the version of the Conservative Party I described above; I still like my politics pragmatic but right-of-centre. I have no ties to a particular past leader or leadership contender; I joined after Stéphane Dion became leader and his leadership was not really a factor in my decision to join.

That said, in my opinion, the Liberal Party ran this election similar to how the John Kerry Democrats ran the United States presidential election in 2004. The Liberals showed up, smiled, told us how evil the Conservative Party (and the NDP) was, and expected Canadians to reject the other guy just, well, because.

To be honest, I think the Liberal Party needs to open up a little more. Look a little less aristocratic and maybe a little more rustic. Will it take a new leader? Maybe one with no ties to the old guard? Perhaps an official position on democratic reform might eliminate this question? I don't know. That's an opinion for another day.
@ 2:44 PM No comments:

On the Election Results ...

It's the morning after last night.

To be completely honest, I found little to be fired up about in this election short of hoping for Conservative electoral defeat.

The final count (and the change from dissolution in parentheses):

I'll have more later when I get rid of this cold I've been fighting the last few weeks.
@ 11:27 AM No comments:

Voting for the 40th Canadian General Election is Under Way

Today is election day for Canada's 40th General Election. If you have not done so already, please get out and vote.

The Elections Canada Voter Information Service is a one stop shop to find out where you vote and who the list of confirmed candidates are in your riding.

As I have done in the past, comment moderation will be on until either sometime this evening or tomorrow morning.
@ 11:48 AM 1 comment:

Shenanigans on the Campaign Trail

The Toronto Star's Richard Brennan calls shenanigans on Jack Layton's shady campaign tactics. He even suggests it's happening in other campaigns!

There is nothing spontaneous about it. The NDP rallies (actually they are all the same) are contrived. Before Leader Jack Layton arrives, supporters practice cheering and waving signs, are told where to stand and when to be excited on cue. The big thing with with the Layton rallies is to have many supporters lined up behind him so the crowds looks much larger than they are. Seldom does Layton break out of the safety of the NDP family.

What I'd like to see in the future from such hard hitting journalism is:

These are just hunches. We need Richard Brennan to dive in and uncover the truth behind the shenanigans!

“I think there are probably some great buying opportunities emerging in the stock market as a consequence of all this panic.” - Prime Minister Stephen Harper

I hear there are great deals on used work boots as a consequence of all this imaginary panic too.
@ 9:27 AM No comments:

I'm curious to know what Charles McVety and all the socially conservative supporters of the Conservative Party who voted in the advance polls are saying now that their tax dollars are once again going to fund "offensive" films? After all, films promoting homosexuality, graphic sex or violence should not receive tax dollars or so we are told.

More importantly, when are social conservatives going to realize that they are just being used as props by Stephen Harper to obtain electoral victory?
@ 6:43 PM 3 comments:

Putting a Price on Carbon the Best Approach : Economists

Good news for us Green Shift supporters as the plan to put a price on carbon, and reduce tax on income, has received support from a broad range of Canadian economists.

More than 230 academic economists have signed an open letter to the leaders of the federal political parties, urging them to acknowledge that putting a price on carbon is "the best approach" to combatting climate change.

Pricing carbon allows every business and family to decide for itself how it values the things that generate carbon, the letter says. Each can consider the options and everyone has the incentive to change, but does it in a way that's best for them.

The full letter and list of signatories can be found at Econ-Environment.ca as well as the list of principles behind the letter.


So now it's 230 economists versus one and his crony.

The Liberal Green Shift is the right solution for Canada to fight greenhouse gas emissions - it being both economically and environmentally viable.
@ 1:56 PM No comments: 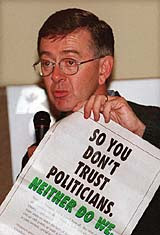 If you have a heart problem, you go to a cardiologist. If you have an abscessed tooth, you go to a dentist. If the biggest challenges facing your country are economic, who should you put in charge?

He's referring to Stephen Harper's degree in economics and thus being the only choice for Prime Minister during an economic crisis.
Jack Kevorkian was once a medical doctor too, but I'm not sure I'd go to him for health care advice.

That being the case, let's look at another pragmatic Conservative appointment based upon careful examination of their background as to their fitness for their new role.

Preston Manning, with a background in economics and the dream of creating a conservative-based political and media infrastructure, was appointed "to provide credible and expert assessments of the science underlying important public-policy issues and matters of interest to Canadians." Apparently, if you have challenges facing your country that are scientific in nature, you turn to a socially conservative economist.

Beyond that, if you're looking for credible, unbiased advice on who to select as Prime Minister - look no further than one of his top cronies.
@ 11:14 AM 2 comments:

Where Have I Been?

Wow. I must have fallen off the face of the earth, if I haven't posted since September 17. My only excuse -- because apologizing for a lapse in blog posting is apparently cliché -- is that I've been enjoying real life too much.

I woke up on Sunday morning to a vandalized election sign. Looking at my neighbours, I deduced that I was merely the victim of some kids playing with it as my sign was the only Liberal one hit. It even looks like they tried to fix it afterward.

Having read the stories of a new round of attacks on Liberal supporters, I checked the rest of my property just to make sure that I wasn't hit.