Get Used to It 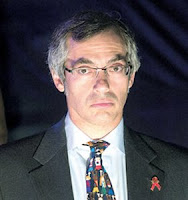 Look, it's another Liberal inside job to undermine the Conservative government's non-position on climate change.

A major Health Canada report is warning of a jump in health problems across the country as the planet's climate changes, ranging from more heat-related illnesses and deaths to outbreaks of previously unknown infectious diseases.

A 500-page report released Thursday urges the federal government to act immediately to gird the nation for an onslaught of climate change calamities.

"The findings of this assessment suggest the need for immediate action to buttress efforts to protect health from current climate hazards," it says.

The report forecasts more frequent heat waves will increase the number of heat-related illnesses and deaths and lead to more respiratory and cardiovascular disorders.

I, for one, am glad Tony Clement is on the job.

Speaking to reporters at the Conservative caucus retreat in the rural Quebec town of Levis, Health Minister Tony Clement said Canadians will "have to get used to" the gloomy scenario laid out in the report.

"This report makes it clear that if you have bad health outcomes now, you're likely to be more impacted by extreme weather events than if you're at the top of the health ladder," he said.

Let's do nothing and just make sure everyone gets used to it. A pound of cure beats an ounce of prevention all the time.