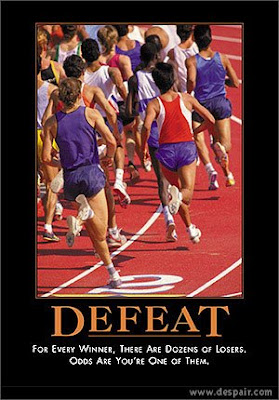 I think there is a dangerous rise in defeatist sentiment in this country. I have said that repeatedly, and I mean it and I believe it.

Indeed, he certainly believes it.

Stephen Harper will make the case to fellow G8 leaders next week that it's futile to reach a global agreement on climate change without including the world's biggest polluters.

"At the end of the day, if we don't get an agreement where major emitters play a role in helping to reduce greenhouse-gas emissions, we're simply not making any progress," [PM Stephen Harper spokesman] Soudas told journalists at a pre-summit briefing.

The Conservatives say the Kyoto targets are unattainable, and trying to meet them would tank the economy. Complying with Kyoto, they say, would lower Canada's gross domestic product by 6.5 per cent, cost 276,000 people their jobs, reduce per capita income by 2.9 per cent next year and squander $51 billion in national economic activity.

Noting those concerns, a quick search through Google turns up the following:

But, in some respects, it's pointless to point out positive examples. Those who deny human involvement in climate change or those who would have us do nothing will continue to point out there are worse examples of polluters anyway.

They insist we have to set our bar at the lowest possible level. They insist it is impossible to innovate and demonstrate to nations who haven't had the luxury of polluting through an industrial revolution that is possible to do otherwise.

The biggest threat, apparently, is the Official Opposition's plan to introduce a carbon tax should they win a majority government and enact this legislation.

There are, of course, no other threats to the West's oil wealth.

Certainly not attempts to question sources of imported oil and their impact on the environment in foreign countries.

Certainly not dramatic rises in the cost of gasoline consumption.

Certainly not the global economic impact of the rising cost of oil.

The truth is, the biggest threat to the West's oil is the fact that the Canadian consumer might decide not to spend money on oil anymore - the costs associated with consuming oil may be too high. That, even if Stéphane Dion's "tax on everything" does not come to be, it has sparked the dangerous notion that consuming oil in order to thrive economically may not be the most ingenious long term plan ever concocted.

Oil might go the way of asbestos and that scares a lot of people.