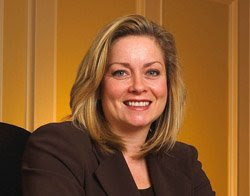 Blue Blogging Soapbox points us to a speech by Linamar CEO, Linda Hasenfratz, who pre-emptively came out in favour of Jim Flaherty's assault on Ontario back in December.

I'll just draw your attention to the part BBS highlights:

The federal government has stepped up with proposed tax rate cuts to take us to 15% by 2012, we need the provincial government to cut as well, and we need them to do it today. Evidence abounds internationally that governments collect far more tax revenue after dropping corporate taxes as companies reinvest in new equipment and R&D that drive accelerated sales and earnings growth and therefore tax payments.

Note the urgency. So, naturally, I go looking to find out a bit more about Linda Hasenfratz.

Linda Hasenfratz was born in Guelph, Ontario, in 1966. She holds an Honours Bachelor of Science from the University of Western Ontario and completed an Executive M.B.A. from the Ivey School of Business at the same university in 1997. She is Chief Executive Officer of Linamar Corporation.

Where did I get that biography from?

Prime Minister Stephen Harper today announced the Canadian membership of the North American Competitiveness Council, which was launched at the meeting of North American leaders in Cancun, Mexico, in March 2006.

The Council will meet annually with security and prosperity ministers and will engage with senior government officials on an ongoing basis. The Competitiveness Council is an initiative of the Security and Prosperity Partnership of North America.