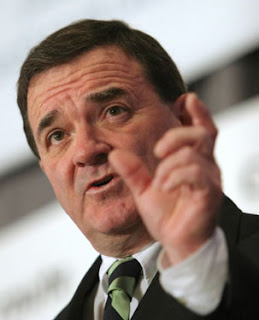 I agree 100% with Dan's hunch that Conservative Finance Minister Jim Flaherty is using his position as federal finance minister to launch a campaign to take over the leadership of the Ontario Progressive Conservative Party.

And this latest escapade further cements that hunch, in my opinion.

I can't help but feel that he wants Ontario's economy to falter, in order to launch a bid to "rescue" Ontario from Premier Dalton McGuinty.

The old manufacturing a crisis trick.

The federal finance minister (especially, one that is supposedly conservative) should not be commenting on the hypothetical contents of a provincial budget unless s/he is going to do so for every province and territory - and in doing so, only in the context of the federal economy.

Further, taking partisan shots at the Premier of this province is just unseemly.
@ 1:42 PM

Furthermore, this is bound to end badly for the country as a whole. Eventually, Ontarians are bound to ask how provinces that are supposedly worse off than us are able to afford lower taxes and higher levels of spending. Eventually, the word "equalization" will start being said around Ontario in the same sense that NEP is said in Alberta.

Eventually, we'll lose patience with being the Confederation's patsy. Eventually, the only province to have never received equalization payments is bound to get sick of being everyone else's sugar daddy. If we're to be attacked for keeping higher corprate tax rates, where's the praise for our large role in funding the lowering of virtually every other provinces' rates. Why do the other provinces get credit for tax breaks they funded with Ontario's money?

Eventually, Ontarians are bound to wake up and start asking these questions.

I'm not sure that Harper would give leave to Flaherty to behave this way unless he saw a benefit to himself. With a poor economic year on the horizon, I suspect Harper would like to blame Ontario for it.

Also, as Harper is not a strong federalist, goading Ontario into criticizing the transfer payment scheme would serve his ideological purposes as well.

I have to think you're right, Mark.

If it helps a future PC leadership bid by Flaherty (sooner, rather than later) all the better.