FOR IMMEDIATE RELEASE: Leader of Festivus Party responds to Launch of NOTA Party 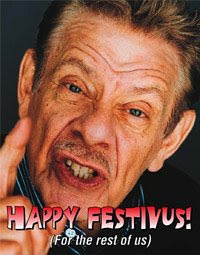 TORONTO, March 12 - The Festivus Party of Canada (A Party for the Rest of Us) remains the only viable Canadian option for the none of the above voting block despite the call for the creation of a new party with a much more representative name. This party is being created by the former Minister of Silly Shoes, Zorpheous.

The Festivus Party is polling second in Central Nova (despite the second place vote actually marked for "None of These").

This is also despite the fact that Zorpheous has a larger blog following and would likely attract a larger political following.

The Leader of the Festivus Party, when approached for comment by Festivus Party media relations on this development said, "What? Who the hell are you people? That joke died out a long time ago."

Deputy Leader, I P Freely, explained that the Leader clearly articulates the thoughts of millions of Canadians when they go to the voting booth on a given election day and sees their supposed list of representative options.
Further, the "joke", being the current state of Parliament.

That's why the Festivus Party remains the best option.

He could not explain why the Leader than called the cops and threatened to have the media team removed from his property - that's neither here nor there.

Discussions of merger talks are clearly immature at this point - no one has offered President's Choice Buffalo Wings & Blue Cheese chips yet. They are yum delicious.

James you're doing a very good job promoting the F-U Party of Canada!!!

Maybe we need to merge our two great parties.

NOTA wants to place 308 potted plants in the HoC to run the Government, it would be better government, and greener, and reduce GHG emissions,... It would also improve the look look of the HoC as well.

You have to admit, it is a srong party platform!!!!

I thought you were the Paul Martin to my Jean Chretien, the Stockwell Day to my Preston Manning, the Mr. Furley to my Mr. Roper, and the Dick Sargent Darrin to my Dick York Darrin all rolled up into one.

Well, if you run a full slate of potted plants, I'll run to be the guy who has to dust them.