How Not to Reassure Liberals : Media Leaks 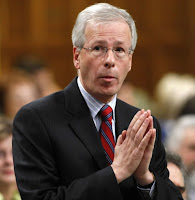 Stéphane Dion followed the script developed by his senior caucus leadership as he announced yesterday that there wasn't enough in the Harper budget to justify an election.

The Liberal Leader, who insiders say wants an election, did not look like a happy man as he emerged from the House of Commons lobby, hand-in-hand with his wife, Janine Krieber, and as per the strategy told reporters that, although he didn't like the budget, the Liberals would allow it to pass.

The fact that his wife was there supporting him shows how difficult this has been.

Do you smell that? Get out the shovel and the rubber boots.

According to the story, in the midst of a crisis in grassroots support for the Liberal party, one that could lead to a leaking of support to the NDP, a story "leaks" of an internal spat among Stéphane Dion's closest advisors about whether or not the Liberal party should call an election.
On one side, we have Stéphane Dion, Ralph Goodale, Michael Ignatieff, "one MP", and "some MPs" - on the other side, Liberal Senators David Smith and Céline Hervieux-Payette and, actually, the entire Liberal Senate.

Did you notice something?

Yes, there are nervous nellies (to use Scott's term) within caucus, but none of those are apparently Stéphane Dion's "closest advisors". All of Stéphane Dion's closest elected advisors want an election, his unelected advisors, that he can conveniently blame for the decision not to bring down the government, do not.

This story then leaks. Angry Liberals are then supposed to say, "Well, Stéphane Dion tried - we love him again."

The Liberals, Mr. Dion included, do not want an election now because they believe they would lose or they do not have enough money to fight one. That's far more believable than Mr. Dion and his elected advisors really pushing for an election and then having it vetoed by Senators Smith and Hervieux-Payette.

If Mr. Dion wanted to bring down this government, he would bring it down. The budget vote, being a confidence motion, would be whipped and he'd tell his Senators to take a hike or go sit as Conservatives. Then, he'd get new advisors.

At the end of the Day, Dion has no one to blame but himself for not using this opportunity to bring the Liberal party together and bring down the Conservatives.

Instead Dion has left the Liberal party a mess. Dion has shown himself to be a puppet of Harper, with no mind or sole of his own.

Am I the only one who thinks that Rae's giving him completely self-serving advice here?

If I'm right, then Mr. Dion is attempting to continue a strategy of chest thumping, but soft support for the Conservative party - he's merely attempting to stop the bleed from hardcore support.

If I'm wrong, then Mr. Dion does not control the Liberal party.

Either way, he's getting some poor advice from somewhere.

Further, if you're a Liberal supporter, which is the better scenario?