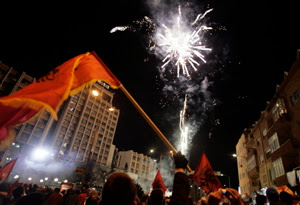 "You have here a population requesting its independence unanimously," [Stéphane Dion] added, referring to the Kosovars. "Nobody will contradict that. They have been victims of very, very serious negative attacks from the former state, Serbia."

This declaration of independence was not unanimous [BBC, Kosovo MPs proclaim independence]:

Kosovo's 10 Serbian MPs boycotted the assembly session in protest at the declaration.

Those 10 MP's represent 8% of the assembly. Not much of an influence in the assembly overall, I admit – it does however indicate how much more complicated a situation this is.

Hypothetically, suppose in a similar circumstance, under a Stéphane Dion-led federal government, a majority Parti Québécois government in Quebec declared independence to an empty Quebec National Assembly, when the opposition provincial Liberals and ADQ abstain. Would the Liberals led by M. Dion recognize and accept an independent Quebec? This would be a "unanimous" declaration of independence too.

Of course, the federal Liberals would not - but the precedent for recognizing such a declaration would have been made.

In addition, if international powers decided to recognize an independent Quebec, like say Serbia and Russia in retaliation for recognizing Kosovo, then what?

There is no question that Kosovo has suffered greatly at the hands of Serbian governmental policy, so it should come as no surprise that the province would seek independence. I also agree that the circumstances behind this declaration are different than a similar one in Canada.

As I said, this is a complicated issue.

A better Canadian position might be a conditional recognition of Kosovo independence itself dependent upon:

This would clear and reconcile our position on declarations of independence, both domestically and internationally.

Canada should not recognize kosovo as the breakup is not legal under the UN convention. The U.S. administration was told not to recognize Kosovo but as usual they did not follow the advice

Thank you for this enlightening piece. As a Canadian living in Germany with both Seerbian and Albanian friends this has been a tough issue for me. The lack of a referedum within Kosovo as well as the seemingly rushed nature of this statement of independence puts me surprisingly on the side of Serbia and Russia.

Canada should recognize it ASAP Quebec and Kosovo issues are two different situations.