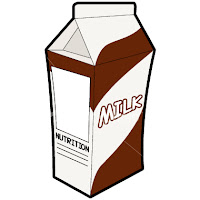 First, before I go on this rant, let me tell you about the good that is chocolate milk. The definition of chocolate milk, according to Wikipedia, goes as follows:

Chocolate milk is a sweetened, cocoa-flavored milk drink. It can be purchased pre-mixed or made at home with either cocoa powder and a sweetener (such as sugar), or with melted chocolate, chocolate syrup, or chocolate milk mix. Other ingredients, such as starch, salt, carrageenan, vanilla, or artificial flavoring, may be added. Chocolate milk should be refrigerated like plain milk.

Plus, according to the dairy industry, it's just as good for you as white milk, and a boost for nutrition - adult and kids alike.

All and all, not a bad choice for an adult beverage. It's tasty, it's healthy - plus it's sweet.

But, what I don't get is people, particularly yuppies, walking around proud of their cartons of chocolate milk. Openly gesturing that they are drinking chocolate milk, wiping their lips off on their sleeves ...

Today, I saw a guy walking around taking big chugs out of his big carton of chocolate milk, smacking his lips, and going "ahhh". He was alone and walking down a shopping concourse. This is what I call the chocolate milk swagger. It looked like what you see runners do after they've run a big marathon. I'm not sure what kind of athletic event requires the chugging of chocolate milk, though.

He's not the first I've seen do this either.

It's an epidemic. Chocolate milk is a big hit with the yuppies, I get that. It's good for you and tastes great, I get that too.