The Auditor General's Report - The Preamble 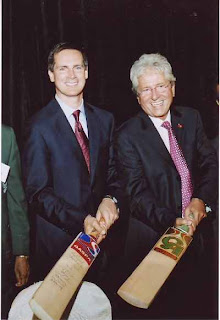 [Note: My apologies if this is a duplicate. I'm having posting issues.]

I'm going to take a three-part look at the Auditor General's Report into the Year-end Grants Provided by the Ministry of Citizenship and Immigration [PDF].

I'll start by providing the opening paragraph of a letter the Premier wrote to the Auditor General, contained in the Appendix of the report.

Since taking office in 2003, our government has implemented a number of initiatives to improve transparency and accountability in our financial management processes. This has been particularly true with respect to our budgeting and fiscal planning processes.

The Auditor General would, of course, demonstrate otherwise. Is it a lie or a mistake? I'll discuss that in another post.

The first stage in this long drawn out affair was to stifle debate and attempt to sweep it under the carpet [CBC, Liberals quash request for 'Colle-gate' probe]:

Ontario's Liberals have defeated an attempt by the opposition parties to have the province's auditor general probe grants handed out to multicultural groups.

At a public accounts committee meeting Thursday, the Liberals outvoted the New Democrats and Progressive Conservatives, who had joined forces to try to force an investigation by Auditor General Jim McCarter.

Since that didn't appear to work, the Liberals pretended to cooperate - even feigned capitulation suggesting that the Auditor General could investigate the Ministry at any time he wanted - it would just be after that nasty election in October [Toronto Star, Liberals halt grants probe]:

Liberal MPP Monique Smith (Nipissing) said at the public accounts committee that the auditor general is free to examine the grants if he so desires, but critics noted the auditor general's next annual report is not due until at least six months after the fall election.

By this point, the Ontario Liberal Party and Dalton McGuinty, became completely dishevelled - so much so, they went completely on the defensive - they implied the Opposition was motivated by racism in its questioning of these grants [Canoe, Opposition say they're fed up with Grit accusations of racism]:

Premier Dalton McGuinty has again made veiled accusations of racism against Ontario's Conservatives and New Democrats which are beneath the dignity of his office, opposition party leaders charged Wednesday.

"We understand that the Conservatives and the NDP will grasp at any opportunity to try and embarrass the governing Liberals, especially with an election a few months away. What we don't find amusing is their using needed assistance to minority communities to further their political ends," McGuinty read from the newspaper.

Thankfully, the Opposition and public would not be swayed by such suggestions. It was unfortunate that neither the government nor its cheerleaders could collectively think, "Maybe if we're preaching that we support transparency and accountability, perhaps we should simply demonstrate it."

All of this stonewalling and unnecessary smearing was done, despite the fact the Minister himself said the questions were legitimate.

When Dalton McGuinty finally admitted he was wrong in this unwarranted opinion of the Opposition and admitted publicly as such - he then, and only then, called for the Auditor General to investigate. Some supporters believed incorrectly this was evidence that there was nothing wrong, and that, in fact, the Opposition would be sorry [Cherniak on Politics, Friday Franks]:

I don't think [Dalton McGuinty] would have called an investigation months before an election without knowing what it would find. Why did he delay? Maybe so that every group affected would know that the opposition thought they were unworthy of government funding. When the report comes out, watch for the Tories and NDP to wish that they had never questioned the value of grants to charities.

Up next, the Auditor General's Report - A Review.