On the Media Ban : Put it to the Soldiers 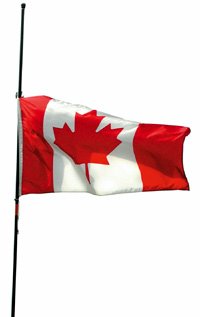 In my opinion, the outright banning of the media on the tarmac for the returning of Canadian soldiers killed in Afghanistan was wrong. These Canadians that we've sent over deserve to be honoured publicly - at the very least, some who would want to pay their respects who could not attend a service, would be able to do so. As well, Canadians need to see the effects of going to war - only then will we ensure we question every future decision to go to war again and that if we do so, we do so for the right reason.

It seems to me that there is a quick and relatively easy way to handle this.

Put the question directly to the soldiers or their next of kin directly on how they would like to be remembered. There seems to be some question of what general protocol should be, when there shouldn't truly be any question and having one overriding general protocol doesn't seem to fit the diverse opinion within the military.

"When troops come home, I believe that's a family matter. I mean, it's a pretty sad time for all family, and I think it should be kept private," Cpl. Darrin Fudge said in an interview with CBC News in Kandahar.

"I don't think everyone else in the world should know what that family is going through."

"In some ways, it would be good for the general public to see. It would give them an idea of what's going on over here," said Master Cpl. Chris Schmidt.

"However, I don't know if I'd necessarily want everyone to see what my family is going through if it was me coming back in that type of plane."

"There's guys back home that knew these guys," Schmidt said. "Maybe that's the only way they'll be able to actually get any type of closure too."

[CBC, Serving soldiers say arrival of bodies should be private]

Christine Wood's son, Adam Seegmiller, was a member of the honour guard that helped load the caskets of the four men killed last weekend into the plane in Afghanistan.

"It's none of Canadians' business, and especially not the media's business, how we celebrate soldiers," said Douglas Bland who served in the military for three decades and now teaches military strategy at Queen's University in Kingston.

"It is the professional responsibility of members of the armed forces -- always has been, always ought to be," he said. "We, the soldiers, take care of our dead and we bury them according to our traditions, our customs."

That is the way it has been for centuries and there is no reason for a media spectacle, he added. "It has nothing to do with freedom of information. What Canadian who is interested doesn't know these people are dead?"

It should be up to the families to decide whether they want reporters present at such ceremonies, said Richard Leger, whose son Marc was killed in Afghanistan four years ago.

"I know, in 2002, it was a great thing for us to have the media there... We wanted to show all Canadians what the cost of their liberty is," he told CBC Newsworld.

[CBC, Harper on defensive over media ban on return of dead soldiers]

this is The Lieberals and the Dippers make politics on the bodies of dead soldiers. Crass in the extreme.

This is the MSM trying to poke a stick in PMSH's eye because he has cut them back a few notches in self importance & delusion.

Read the letter from a CF widow at Kate's SDA blog.

the media are pigs.

From A Canadian Forces Widow

Hi Kate,
I have enjoyed your blog since discovered it during the election.

I trust if you share any of my email that you would keep me anonymous please. I am still having *issues* to say the least with regards to my husbands death.

[The investigation into the circumstances of his death during a training exercise] is still ongoing, at least I think it is. I have never EVER been officially updated on it. That said, the only thing that has been confirmed is there was no pilot error (important for me and my husbands memory to bring that up).

The reason I am emailing you is the issue of banning the media from the base when the soldiers' remains are returned to their families. While my husband was not overseas, I will share with you my personal experience with the media and a very public death.

Thankfully the media had yet to discover my house when I had to go see my husband for the first time. They found me by 6 AM the following morning. My parents had driven up immediately after my frantic phone call. My father stepped outside to get the papers and he was besieged (to say it lightly) with media camped out in my driveway! They were knocking at my door, putting the cameras on us as we opened it. There was always their cars there, with them sitting in them, waiting for someone to come or go. Phone call after phone call to the house when the lines were needed for more important issues. Our grief was made very public. I was asked if I wanted media at the funeral and I agreed to have them there. I wanted the people of Canada to know that even when Canada's sons and daughters do not go overseas, lives are put on the lone on a daily basis for the safety and security of every Canadian. To show them how the phrase "military cut backs' translates into real life in the forces. I had insisted that there not be a close up on any family member. I was sure Joe Blow watching the news did not need to see my tears, or those of my children to know we were distraught. Yet this rule was broken.

The media also pushed for the release of the names of those killed ASAP. Why?? Does it matter to Joe Blow? Shouldn't it matter more that ALL family (not just immediate) and close friends are informed personally even by phone than to hear it on the news? Families of victims killed in auto accidents can request that the names not be released and Joe Blow doesn't complain.

About the Peace tower and the flag flap, if anyone understand tradition it is a military member and his family. Did I expect the flag at the Peace tower to be flown at 1/2 mast for my husband?? oh hell no! But I did expect a phone call or something from our Prime Minister? Just the letter with his stamped signature would have to be good enough. He was in Europe and there is no way that letter was written there and sent to me to receive so quickly. It is also noticeable the signature is from a stamp and not hand signed. I did get a touching phone call and a lovely letter from the Governor General, HE Clarkson.

I will end this letter now. I could go on but I am sure you don't want to hear all the sordid details of how a military widow is really treated.

Except to add, that if I were to walk into funerals of people I didn't know stating it is my right to know who they are etc I'd be frowned on or even thrown out.


Think of this email when you see the tape replays shot by CTV news yesterday from over the fence at CFB Trenton.

If you've never forwarded a post from SDA to family and friends before - consider doing it with this one. The media has been screaming for tranparency. Well, let's give it to them. Turn the "camera" back on the microphone holders for a change, and let ordinary Canadians see the mob for the self-absorbed ratings vultures that they are.

More evidence that choice should be given to the families, and taken out of the hands of Prime Ministers, politicians, bureaucrats, and the media.

I can produce they same kind of letter from families suppporting the media being there, including Lincoln Dinning.

Jim Leger, on that same broadcast Jim talks about, said that accomodations could be made for both - families wanting the media there (or not minding) could have had it. Once they were done, and the media cleared out, the others could have been brouhgt home. Easy, respectful and everybody wins.

Jim's point is the real crux of this. Niether the CF or the families were asked. The reason given was for the "privacy of the families" yet all over the news and the net, the majority of the families and friends of the curent and past fallen have said they wanted the media there, that they appreciated the coverage and the support they recieved because of it. So clearly saying this is for the families is not true - they were never asked and, as pointed out over and over last night on CTV, have never before complained. The media coverage has never been a problem for the families or the CF in the past (and I dare you to name one isntance, in Canada, where a family memeber has asked for privacy during this time and not been granted it by the media. Just one time).

That means Gordon O'Connor's stated reason is not true. The CF has further indicated that this came from O'Connor and not them. Meaning that this descision was made, without consultation with the CF or the families and the stated reason for the descision is contradicted by the majority of those families.

Now, tell me again how its the Liberals and the NDP making politics on the bodies of dead soldiers? That's O'Connor and Harper's doing - they want to hide the casualties rather than let Canadians see the truth. Now that is nothing but political.

Let me tell you right now, if Gen. Hillier had called a news conference and said, after consulting with the families, we have decided not to allow the media into Trenton for this homecoming, because the families have requested privacy, then we would not be having this debate. No one would be arguing because we would have respeced the wishes of the familes or the CF.

But that wasn't the case. O'Connor made the descision on his own and then lied about the reason.

Shame on him for politicizing this. And shame on you for perpetuating the lies Fred.

I am a spouse of a military man serving in Kandahar. I have read both sides of the spectrum and I have also seen first hand that the media is not very respected when coming to report on a soldiers death. From all my research and personal experience. I truly believe that it is the family that should make the decision. In my opinion I would not want the media present on the Tarmac. But other military wifes feel different. The reason I do not want this is because the media is present when the fallen are coming from Kandahar in the ramp ceremonies. This is Canada's time. My time is when he comes home. I don't want my face or my children's face over every single newspaper. Yes I want the country to remember my husband for his sacrifice. But I think there is a time and a place for everything.