And, on a Less Serious Note 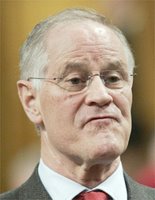 Count on Bill Graham for a little unintentional irony to lighten the mood [CBC, Reaction to Harper's cabinet appointments]:

I find it worrisome that Mr. Harper has chosen someone for his cabinet who was elected under the Liberal banner just a couple of weeks ago.

You and me both, there Billy. I guess it's a good job you guys didn't win the election, because I'm almost certain there would have been a whole mess of cabinet members chosen who were running under the Liberal banner.

Perfect.
Wish I noticed it.

I guess it was ok when Wanabee Barbie Stronach did it eh Bill?