The summary (subtracting where I disagree in parentheses): 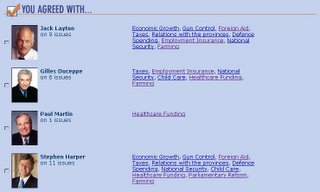 I disagreed with the NDP on withholding health transfer payments - I don't think patients should be punished for the provincial governments they elect. And, you might argue that it's not punishing patients as it is that you'd be punishing the provincial governments for not spending the health transfer payments in accordance with Ottawa's wishes, but I think provinces should ultimately decide what health care priorities exist there.

I'm also not entirely sure on the parliamentary reform package that says an MP cannot switch parties unless they resign their seat and run in a by-election. I can sort of see it, because most people vote for the party and not the MP - but, resigning a seat, I'm not sure of. Maybe sit as an independent - but not resigning a seat.

Updated: Whoops. Here's the link to the quiz. I'm sure if you followed the link through to SS's site, you would have found it there too. My bad.