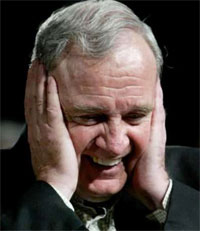 Courtesy of the NDP [NDP Official Site, Welcome to “Give’em the Boot” Bingo], we have a bingo game you can play as you watch Liberal Party Leader Paul Martin talk during the debates. I could see, for those of us less responsible, easily turning this into a drinking game.

When listening to Paul Martin talk, do you ever say to yourself – that sounds familiar? Didn’t he say that last time?

If it was a commitment to do politics differently, clean up the environment, cut the costs of going to university, or improving health care…you’re absolutely correct.

He’s says a lot of things and it’s getting harder and harder to believe him. His biggest problem isn’t making promises – it’s keeping his promises.

So as a public service, we invite you to gather around with family and friends, get some beer and popcorn and settle in for “Give’em the Boot” Bingo during this Friday night’s English Language Leader’s Debate at 8:00pm ET/5pm PT.

During the debate, just cross off each phrase on your bingo card as Paul Martin says it. The first player with five-in-a-row wins.

Beer and popcorn ... that seems like a fantastic idea.

My favourite Martin cliches available on the bingo cards.

The following, however, are missing:

Another Martin cliche: "We cannot afford to...". I was just thinking this morning about how you could turn a martin speech into a drinking game.