A Couple of Oddball Questions for You

I need some CBC Radio verification on a couple of points. I heard two things over the past week on CBC Radio One in Toronto.

1. Gilles Duceppe has thanked Canadians calling his campaign office, but he has repeated that he has no plans to run candidates outside of Quebec. That said, I heard that the Bloc Quebecois polls at about 3% in Vancouver? I can't find it anywhere. 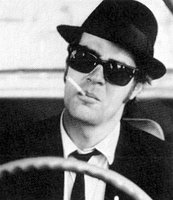 2. The NDP has a star candidate in the wings, and I mentioned it in a comment over at another blog. Dan Aykroyd is rumoured to be contemplating an election run as an NDP candidate in Toronto or area. Anybody got any dirt on that? Man, Elwood running as a Dip. I'd cheat on Steve-o to work with Dan. From Now Toronto:

Dan Aykroyd, that wild and crazy guy of Saturday Night Live fame, has turned his conehead to activism.

Aykroyd has joined the advisory committee of the Ottawa-based Democracy Watch (DW).

DW director Duff Conacher is also at a loss to explain why Ottawa-born Aykroyd chose to throw his name behind the group's efforts, which include banking reform. Hmm. Could it be that Aykroyd, who's about to receive the Order of Canada, wants to add another good cause to his resume?

Now, this doesn't say anything about him joining the NDP - but I heard that on the radio this week, and this was the only thing that popped up in my Google search.

That is all. Let me know if you know anything, or if I'm a complete nut.

My apologies if blogging seems light. I am around, commenting on other blogs and such.

1. Apparently there were people is Saskatchewan who wanted him to run candidates there as well.

2. It would be awesome if Mr. Aykroyd would run for the NDP. He'd be way better than that guy from the Barenaked Ladies.